For 20 years, the Christmas episode of favorite British comedy Only Fools and Horses has been as much a Christmas Day event as The Queen’s Speech.

Here writer Steve Clark, author of Only Fools and Horses: The Official Inside Story, reveals Christmas secrets on the legendary sitcom.

Only Fools and Horses is the show the BBC never wanted.

In fact, the Beeb turned it down when writer John Sullivan first offered it to them – and his disappointing reviews meant he came very close to being axed after only two series.

He laughs at you

Much of it was filmed on a 90ft boat off the coast of Yorkshire – and even before filming began there were problems for director Ray Bate. 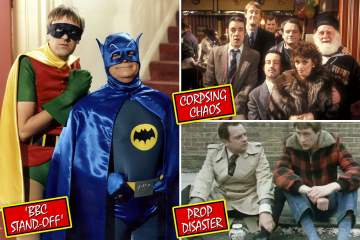 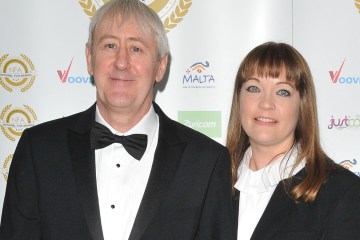 Once he got on the boat, stars Nicholas Lyndhurst and Buster Merrifield gave him bad news — David Jason was in a cabin and he was feeling terrible.

He was lying in a green looking bed and moaning every time the boat rocked.

“It looked terrifying,” Pat recalled. I said: Well my friend? And you just groaned.

“I said, ‘Is there something I can have?'” And he groaned again, and then burst out laughing – he couldn’t keep up. It was a wind and I fell for it.

“I said, ‘Get out of this bloody bed—or I’ll throw you over the side!'”

In one of the famous moments in the episode, Dale calls a man working on a gas rig and asks for directions to Holland. The scene was only 30 seconds on screen but took nearly a day to shoot.

Producer Ray Pate, who flew to the rig in a helicopter, recalled, “It took us six hours to sail to the oil rig there, and then we shot it really fast. Then it took six hours to get back to Hull.”

“Though they had the longest voyage, they laughed at me one last time because before they left the port they had filled the boat with wine for some party and had plastered themselves with posters.”

The 1986 Christmas special A Royal Flush comes close to not being prepared for Christmas after David Jason loses his voice for three days and Nicholas Lyndhurst comes down with the flu.

Filming of the episode, in which Rodney falls in love with the posh Victoria, daughter of the Duke of Maylebury, began in November and was plagued by problems including an electricians’ strike.

Producer Gareth Gwenlan said, “The fact that it came out at all is a miracle.”

Filming delays meant that there was no time to screen the episode in front of a studio audience in order to record a laugh track, nor was there time to add any music.

There was even a contingency plan at one point to do the final scene right in the apartment on Christmas Day.

The episode was completed in time with editing only finished in the wee hours of Christmas Day – a few hours before it was to be broadcast.

The trio were supposed to deliver a drunken drink to a friend of Del’s named Chunky Lewis, who ran a nightclub in London’s West End.

The Trotters’ plan was that they would take a wrong turn and end up walking onstage at the Palladium during the show.

David Jason worried about the line he would have to hand over to the royal box, which would be occupied by the Queen Mother and Fergie, Duchess of York.

David said: “I said to John Sullivan: ‘Christ, we’re going to lock ourselves up in the Tower for this! ‘” “

John Sullivan recalled: “When I wrote about Chunky I didn’t know the Duchess of York would be there. That was before she joined WeightWatchers and in those days she had a few pounds off her.”

David recalled: “The royal gag was so funny. Rodney looks into the royal box, while Del looks elsewhere, sees the royal family and starts scraping, bending over and saying, “What’s wrong with you?” Then Dale looked at this box and, dimmed by the lights, said, “Chunky, is that you?”

The line brought the house down — and prompted an immediate response from the Queen Mum as David recalled: “I could already see — and I started doing the Royal Wave,” he laughed.

“I couldn’t believe it. Everyone fell. Bless her cotton socks. She might have been good at gin and tonics by then, but she did it for whatever reason!”

Exit with a bang

The much-loved The Jolly Boys’ Outing in 1989 saw the Nag’s Head gang go out for a day in Margate.

A memorable moment in the story came when the car’s radio ignited the bus’s fuel tank and caused a massive explosion, which blew up the car.

The production team bought a coach for £2,000. The bus had to pass its MOT and be safe for road use for scenes of the group traveling to Margate.

For the site of the explosion, the BBC’s visual effects team got to work and placed tanks containing hundreds of gallons of petrol along the way into the baggage compartments.

Firefighters from Kent Firebried also stood by to douse the flames. “We knew we could do the explosion two or three times if the fire was quickly put out,” said producer Gareth Gwenlan.

Clash with the mafia“

Del Boy and Rodders went to Miami, Florida in 1991 for the second half of a two-part Miami Twice Christmas special, but despite careful planning, the nearly £2 million episode was a wreck.

In the story, Del and Rodney run into trouble when Del is discovered by a mafia gang who realize he is a fanatic of the head of the family, Don Occetti – and if his look-alike is seen publicly assassinated, the criminal could escape from prison.

The dual role meant David Jason had to film twice as many regular scenes, but even that was easier than the real-life nightmare the cast and crew faced at the hands of bizarre mafia-style figures from a powerful union.

Despite assurances from Miami authorities that strong unions would not cause trouble, within days of filming beginning, the Teamsters union was threatening to shut down production.

Producer Gareth Gwenlan, mafia style, is summoned to a meeting with the boss of the local syndicate.

I found this fat, bald guy sitting at his desk. His true James Cagney accent was at its worst and he said, “So what are you doing in my town?”

The producer explained that the BBC employs a lot of local people, but this was not enough for the union boss.

“I want twelve of my drivers on that set tomorrow, or I’ll shut you down.”

The next day, the union halted the set and halted production because none of the American crew crossed the picket line.

In the end, the dispute was settled as the BBC was forced to hire three members of the team as drivers, even though they had no work.

In the end, one of the drivers was hired as a chauffeur for John Sullivan, rather than pay large taxi bills. “He was a very kind and gentle man,” John said.

It wasn’t until much later that John found out that his mild-mannered driver had just gotten out of prison after 16 years serving time for murder and armed robbery.

Almost lunch for the crocodiles

Nicholas and David filmed a scene in the Florida Everglades, perched on a six-foot log less than eight feet behind them.

“Some people think we shot it behind a glass screen but we didn’t, we were really just a few feet away from some big old Jaws,” Nicholas recalled.

“We knew she was close because we could hear her breathing but when it came to start filming she wouldn’t do anything. He just sat there and then when they needed him to fight back and move around a bit they got a guard with a long stick to hit him in his private parts and of course after that he started growling!”

“We had a guy to my left with a rifle pointed at the alligator’s head and then between us, just to the side of the camera, was a . 44 Magnum Ranger pointed right in front of us, again at his head.

“Honestly, I said, I’d rather have the alligator than have a gun five feet away waving at my head.”

The text also called Dale into a quagmire. “We were pressed for a while and David ended up filming it in crocodile-infested water,” John Sullivan recalled.

“It was one of the bravest things I’ve ever seen because we had no idea what was under the surface, and a spray like he did would alert every crocodile around. It took some guts.”

The final moments of the first episode of Miami Twice saw the Trotter brothers exit Gatwick Airport and make a guest appearance by Virgin boss Richard Branson – but the shot had to be reshot several times.

Gareth Gwenlan explained: “Richard is a nice guy but he can’t act to save his life.

“For the first 10 minutes of filming, he couldn’t keep his face straight, and then he had to take it seriously because he had his private jet waiting to leave.”

Filming the memorable Batman and Robin scene in the first of three 1996 Christmas specials required David Jason and Nicholas Lyndhorst to completely fool themselves.

“You can’t take yourself so seriously and do things like that,” David smiled. “You have to be a little silly in your head to do that.”

Filming took place in the early hours of a cold November morning. David recalls: “Nick and I had to shoot the movie about six times because we couldn’t do it for laughs.

“I was looking at him with all his gear and he was trying to say serious lines and I found it very funny. He was like, ‘What are you laughing at?'” And I would say, “Well, you have to see you where I see you.”

The production team wanted to keep the Batman and Robin scene a secret until viewers saw it on Christmas Day, so the actors stayed in their convo until the last minute.

Photographers trying to get footage from the shoot were dazzled by the extra film lights and encouraged by a security guard with a Rottweiler to leave the area.

The episode was a huge hit, watched by 21.3 million people and the final installment of the trilogy was seen by 24.3 million people – still the largest British television audience ever for a comedy.