Despite the fictional Pandora world in which the story takes place, “Avatar: The Way of Water” filmmaker James Cameron maintains that one of the advantages of his original franchise is that the problems facing these fictional characters are real, unlike superhero movies. Where “the heroes run into someone trying to conquer the galaxy.”

In a lengthy interview with TheWrap magazine Our cover storyCameron broke with “Avatar”‘s worldwide appeal while emphasizing that he has nothing against superhero movies.

“One of the things we’ve been successful at with the first movie is making it relatable to him all over the world, across all cultures,” said Cameron. “Not only did it work here in the US, but we made three-quarters of our money in the rest of the global market. So it was important to me that we kind of tell a story that was global, so everybody deals with fathers and sons and mothers and daughters and brothers and sisters, all that kind of Things. It doesn’t matter what culture or language group you’re from or what religion you’re from. It’s a universal idea.”

The “Terminator 2” director drew on his personal experience as a teenager and also as a father to craft the central story of “The Way of Water,” which finds Jake Sully (Sam Worthington) and Neytiri (Zoe Saldaña) juggling their responsibilities as parents with responsibility to their people and their community.

“Now, I can’t speak to their individual kind of cultural barriers about that, how that works, I can only talk about my own experience where I was on both sides of the equation as a teen that people didn’t understand — I mean first of all, all teens feel like they don’t belong, they don’t fit But if you’re an entertainer in a really good high school, you get beat up a lot and you look up to other misfits,” Cameron said. “My dad didn’t understand me. My mom did, because she was an artist.”

“And then I get to live the other side of that as a father of five and see how my kids have suffered in their different ways, all in different ways because they’re all different people, so it’s all been a great thing for the plant. I put all of this on this wonderful planet with all these amazing prospects and all that.” “But she totally grounds it and says these are real people. They may be nine feet tall and blue with cat tails, but they are real people because they feel real. The problems they face are real.”

Cameron continued, noting that he loves superhero movies, but specifically made “The Way of Water” and the upcoming three additional sequels so that the characters would have more relatable challenges.

“They’re not unusual problems. They’re not having someone trying to conquer the galaxy.” They have real problems. And I’m not against superhero movies. I love them, they are our modern myths and legends, they are the fighting Greek gods. We love all of these things, but this is not the movie I wanted to make.”

When the first “Avatar” opened in 2009, Christopher Nolan’s Batman movies were a huge hit and “Iron Man” had released a year early, but the Marvel Cinematic Universe wasn’t yet an assembly line of continuous, commercially appealing superhero films. “The Way of Water” now opens up to a superhero-dominated market, and while the film’s box office got off to a great if somewhat soft start, time will tell if this universally relatable approach from Cameron can stun twice.

Avatar: The Way of Water is now showing exclusively in theaters. 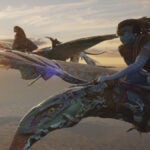 Do you know what matters for five days a day?