Zara and Mike Tindall looked coordinated in gray outfits with a hint of burgundy as they held hands of their youngest daughter, Lena, four, to join the monarch and other royals at a church service this Christmas morning.

Princess Anne’s daughter, 41, and her husband, 44, were seen walking behind the Prince and Princess of Wales as they headed to church for the ceremony at St Mary Magdalene in Norfolk County.

The parents of the three children were holding little Lena’s hand, who was wearing a burgundy frock coat with gold buttons, while their eldest daughter, Mia, eight years old, was walking in front of them in a gray frock coat with lapels.

The youngest, one-year-old Lucas, did not attend Christmas Mass because he was too young.

color coordination! Zara and Mike Tindall, 41 and 44, cuddled with their youngest daughter Lena, aged four, as they walked to St Mary Magdalene Church in Sandringham for Christmas Day service

Princess Anne’s daughter, Zara, wore a gray coat by L.K. Bennett and a hat by London milliner Juliette Botterill. She paired the outfit with a burgundy patent leather handbag and burgundy pumps.

At one point shy Lena seemed to play with her parents as she walked around with them and seemed like she might want to break free. However, the excited young royal cheered the crowds on.

This is the first Christmas at Sandringham in two years after the late Queen stayed at Windsor for Christmas 2020 and Christmas 2021 due to the coronavirus pandemic, and the first time the family has spent the holidays without the late monarch. 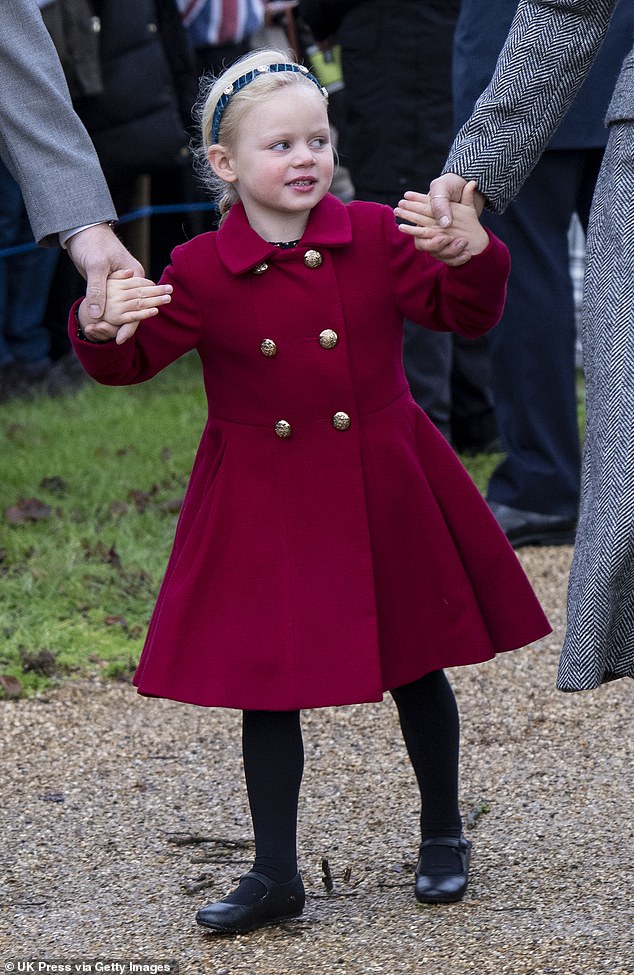 Little Lena, just four, wore a burgundy coat with gold buttons, tights and little black shoes as she took part in the ride with her parents and older sister, Mia.

Eight-year-old Mia Tindall appeared with a shy smile as she walked with her hands crossed in front of her while wearing a gray trench coat and burgundy hoodie to match her mom’s ensemble (pictured with her dad, Mike)

Like the rest of the royal family, this is the first time Mike and Zara have attended a Christmas Day service in two years.

The occasion was canceled in 2020 due to the Corona virus crisis, and it did not take place in 2021 either, as the late Queen stayed in Windsor for the holidays in a departure from tradition.

Hundreds of well-wishers had been queuing since the early hours to catch a glimpse of the royals, and waved excitedly as the king and queen drove to church.

The bittersweet occasion saw the family display unity as they celebrated their first Christmas since the death of Queen Elizabeth II, who died on September 8, and following the explosive Netflix documentary by the Duke and Duchess of Sussex.

It is the first time that King Charles III has staged this event, marking the beginning of a new era for the royal family.

The Prince and Princess of Wales will stay with the King and Queen consort for the holidays, along with the Earl and Countess of Wessex and their children. 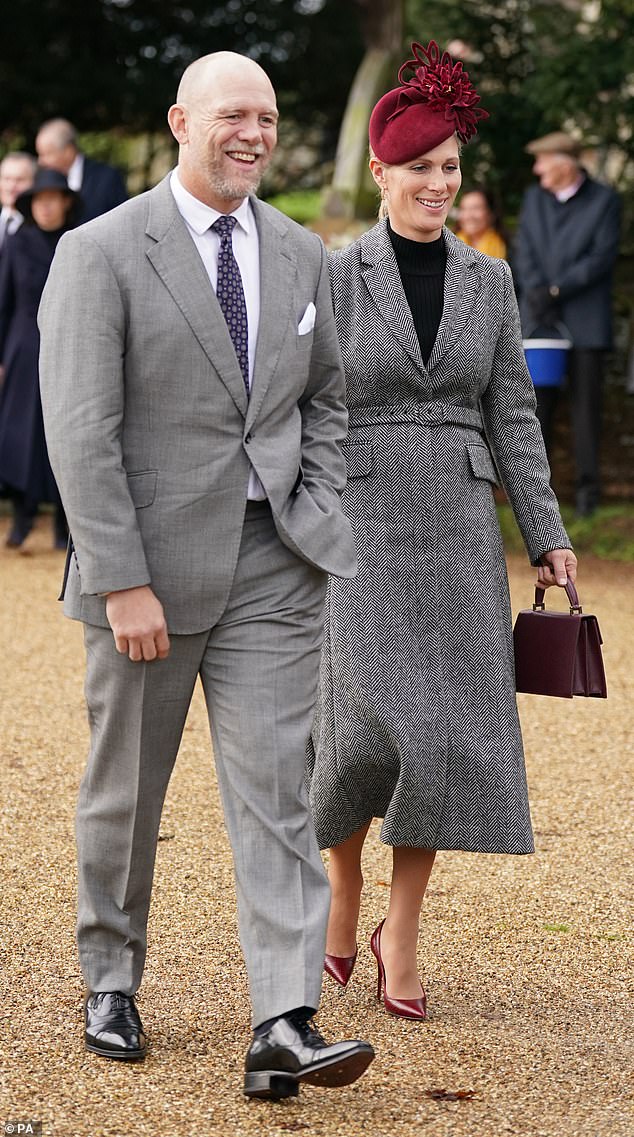 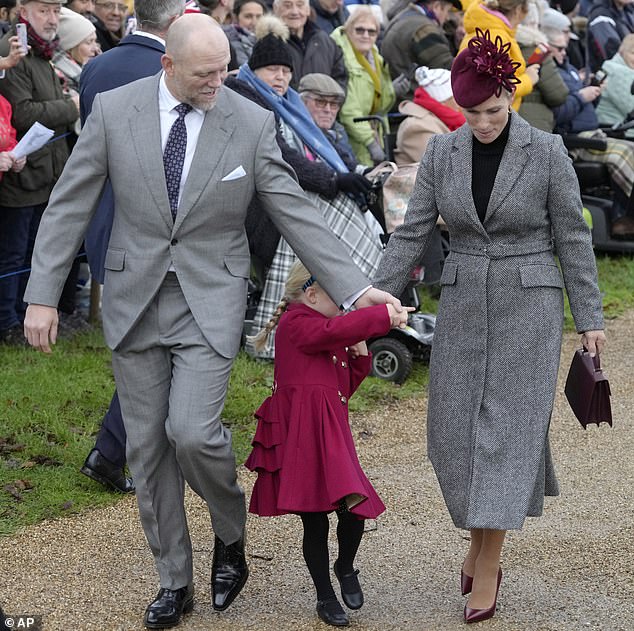 game time! Little Lena looked like she wanted to play as she walked hand in hand with her parents to St. Mary Magdalene Church.

Speaking ahead of the festivities, Mike Tindall admitted the Royals’ first Christmas without the Queen would be ‘completely different’ because He opened up about his family’s festive plans on his podcast The good, the bad and rugbywhich he co-hosted with James Haskell and Alex Payne.

While filming a YouTube Christmas special, Mike — who appeared in I’m a Celebrity Get Me Out Of Here earlier this month — was spotted wearing a Santa Claus hat and wrapped in a rope of gold tinsel.

When asked by host Alex Payne if Christmas for the Royals would be “totally different,” Mike replied, “Yeah, it probably will be.” I really don’t know, I’m looking forward to it.

“Obviously there’s been a lot of change, a lot of firsts.”

This year will be the first time that King Charles will deliver a Christmas address to the nation – something the Queen has done every year of her 70 years of reign.

He is expected to speak movingly about Queen Elizabeth in his first Christmas message which will be broadcast at 3pm today.

The broadcast was produced by BBC Studios Events rather than ITV, whose role it was to record the King’s first ceremonial speech under a rotating production system between the BBC, ITV and Sky News.

It is believed that the royal family went with the BBC as they had “the experience of filming at St George’s Chapel this year”.

Royal biographer Sally Bedell-Smith told The Times that The Monarch had invited the Duchess of York to spend Christmas at Sandringham with the rest of the family for the first time since her divorce from Prince Andrew.

Meanwhile, the Duke of York will also spend Christmas at the royal palace, but this morning he did not appear for a public march to church.

Yesterday, I watched the country as the family put on a performance of unity at Kate’s Together at a Christmas Carol party at Westminster Abbey.

The event, which was recorded on 15 December, was broadcast on ITV at 7:30pm last night to celebrate Christmas Eve.

Ahead of the event, the Princess of Wales revealed that the heart-warming concert had been dedicated to the late Queen, “and to all those who are unfortunately no longer with us.”

In an introduction shared before the ceremony aired, Kate spoke emotionally of the late King’s affinity for the festive period “as a time that brings people together and reminds us all of important values.”

The 40-year-old queen held her first event last year, and it was such a success that she’s decided to bring it back – in the prospect of becoming an annual event. She said: ‘Last year’s event reminded me of what I love most about Christmas, seeing people gather, celebrate and experience special moments, while also reflecting on the year gone by.

This Christmas will be our first without Her Majesty Queen Elizabeth. Her Majesty The Queen held Christmas close to her heart, as a time that brought people together and reminded us of the importance of faith, friendship and family, and to show compassion and mercy.

This year, the Princess has invited hundreds of “inspirational individuals” to service to recognize their contributions across the country.

She described them as: “Those who showcase the power of connectedness and the values ​​of community, allowing us to continue Her Majesty’s tradition of appreciating and thanking those who have gone above and beyond to support others.”

She added, “Her Majesty the Queen left with us a wonderful legacy that inspired us greatly. This year’s caroling service is dedicated to her and all those who are unfortunately no longer with us.

So while Christmas will look very different this year, we can still remember the memories and traditions we shared.

“Take the time to relax and celebrate with family and friends all the wonderful things that make Christmas so special.”

In a £400 black sequin cardigan, from Self Portrait, she recorded the letter last week during a visit to the Abbey amid final preparations for the service.

With the support of the Royal Institution, the service was held in Westminster Abbey on 15 December and was attended by dozens of senior members of the royal family including Her Majesty the King and Queen.

The program was narrated by Catherine Zeta-Jones, and featured tributes to Her Majesty The Queen and short films highlighting individuals who go above and beyond to support others.

The source claims that King Charles is banning Prince Andrew from Buckingham Palace after the Epstein scandal and he will no longer be allowed to have an office in the building or use his address for correspondence.

And King Charles takes charge of royal Christmas: Fergie will have lunch with the family at Sandringham while Harry and Meghan are away, but Prince Andrew won’t join the others on the Christmas Day walk to church

King Charles will always keep the door open for Prince Harry, but the royals probably don’t think they owe an apology to the Sussexes, Rebecca English tells Palace Confidential.